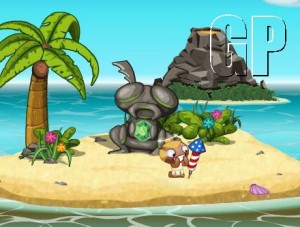 Frima Studio, Canada’s leading independent game developer, announced today in conjunction with Bolt Creative, a San Francisco-based developer of original mobile applications and games, that the Pygmies of Pocket God on Facebook will be celebrating the 4th of July festivities with a global in-game event! From now until July 7, players can participate in a new dance craze sweeping the island and win a new idol in the process, and can also send a special holiday-themed item to their friends.

Move over Macarena, the Indepen-Dance is the premier dance all the cool kids are doing nowadays. During the night, Pygmies may display the urge to cut a rug—or rather, sand—and it’s up to you to make sure that your hip, little Pygmies keep with the times and participate. Until July 7th, if 100,000 Pygmies shake their booties on the floor, all players will receive a limited edition Liberty Bell idol for their island. What are you waiting for, get on the dance floor already!

Players can also send their “friends” a special gift in the form of a rocket! For just one bone, would-be deities can bestow a rocket to their loved ones, giving the recipient a chance to view a monumental fireworks show. Each fireworks show also recharges five devotion points so you can keep the party going. And no, you can’t light the rocket underneath your friend’s butt.

To get the 4th of July festivities started, check out Pocket God on Facebook at http://apps.facebook.com/pocketgod/.