Kratos. Yeah, our old god-slaying, family-killing buddy Kratos! Wait… Was that just a spoiler for the new God of War: Ascension?! Hell yes! Or, rather, it would be if it wasn’t a prequel! 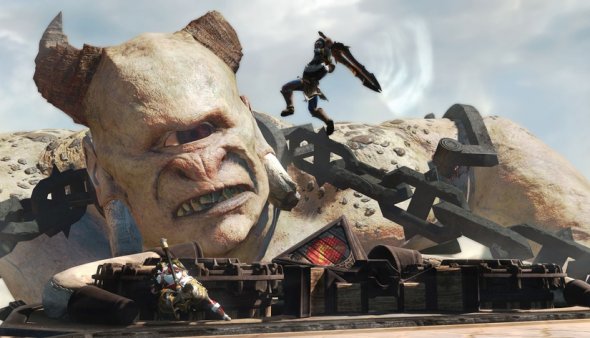 Something tells me this guy’s eye is a weak point…

Seriously though, God of War is one of my favourite hack-and-slash, combo mania style bloodbaths. For someone who normally complains when games are pretty short I’ve always been satisfied with the intensity of the slaughter, the creativity of the weapons, and the pure joy of playing two particular series. One is Devil May Cry and the other is God of War. Both have three letter acronyms, which I don’t think is a coincidence!

Ascension looks to be a particularly amazing bloodbath, though, with the inclusion of new-yet-somehow-old-because-it’s-a-prequel mechanics of grabbing the weapons of your soon-to-be-dismembered enemies allowing for pretty sick looking mid-combo weapon switching. While not terribly much has been revealed about new weaponry, we can expect plenty of fun with our old-but-new (prequel, yeah?) friends, the Blades of Chaos. Imbuing the blades with elements like fire, ice, and black magic makes for some interesting mid-combo tactic changing if we can trigger this at will. 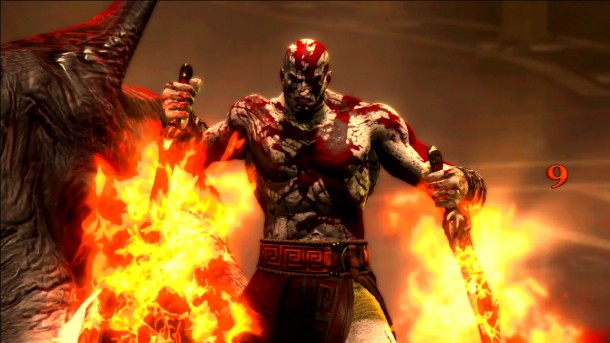 One thing you may notice when you play that you definitely cannot trigger at will, however, is Kratos’ terrible, terrible Rage. Rage mode has undergone a few changes such as being filled by simply being amazing while mowing down your enemies. It is also no longer a triggered ability. As we might call it in the RPG circuit, it is “passive”! This means you can gleefully mow down enemies while building up such a Rage that, when triggered, nothing can quench! Except for, perhaps, getting hit by an enemy. It’s a good thing I’m already used to barrel rolling like a crazy woman, right? Right?!

Of course, Rage, isn’t particularly new. Neither are all the coloured chests or the stabbing things mercilessly with the Blades of Chaos. That’s fine, though, as we pretty much expect these things as staples of our pasty murder quest. What I definitely did not expect, however, was the inclusion of multiplayer! It sounds pretty sweet, what with selling the soul of your champion to a patron god and then proceeding to kick butt in a free-for-all style or a four-versus-four battle for control of the blood coursing through your opponent’s veins. For game modes you’ve pretty much got your point-based killing with treasure and orbs tossed in, your team point-based killing with treasure and orbs tossed in, and a capture the flag mode. There’s supposed to be a fourth mode out there and I’m desperately hoping for massive army battles even though that’s not likely to happen.

So while we may not know too much about the new weapons and combos and ways to tear/cut/smash the limbs/organs/blood out/off of your enemies, we do know some very key facts that I will leave you with. Kratos, as standard, is angry. The weapons will be more fun to use than hear about. The puzzles are going to be pretty cool and likely involve blood or body parts. Boss battles will be pretty epic. Oh, and Kratos is angry.

He’ll be seeing you March 12th.